Commitment to Supporting Newcomers
From helping to find housing and build language skills, to teaching newcomers how to vote in elections and participate in politics: Dedi takes on any-and-every-thing she can to help newcomers navigate the new systems and challenges, so they can get settled as comfortably as possible.

Born and raised in Saskatchewan, not only has Dedi worked extensively at the local level, but she has also worked with provincial, national and international organizations focused on human rights, employment equity, labour and anti-racism. Retired from her career as a psychiatric nurse, Dedi currently serves as the president of Spring Free From Racism, and also for the Saskatchewan Association on Human Rights Inc., an organization she’s been active with for nearly 40 years.

When asked what inspired her volunteer work for newcomers, Dedi explains that her father was a Ukrainian immigrant who struggled with language, employment, and other barriers while settling in their new country. Looking after rooming houses, her parents literally opened doors to many newcomers from around the world, so she grew up realizing she too could support newcomers who struggled with barriers and discrimination.

She also provides bridges for newcomers to supportive organizations, bringing people together to build relationships and enjoy mutual benefits. This year, Dedi’s years of work on the Mosaic, Regina’s multicultural festival, have led to her successful lobby for an innovative new pavilion. It will feature five different cultures that have smaller populations in the community, but want to participate: they will share the venue, the stage – and the costs. According to Dedi, it’s an innovative opportunity for them to showcase their traditional culture to their new neighbours in Regina. 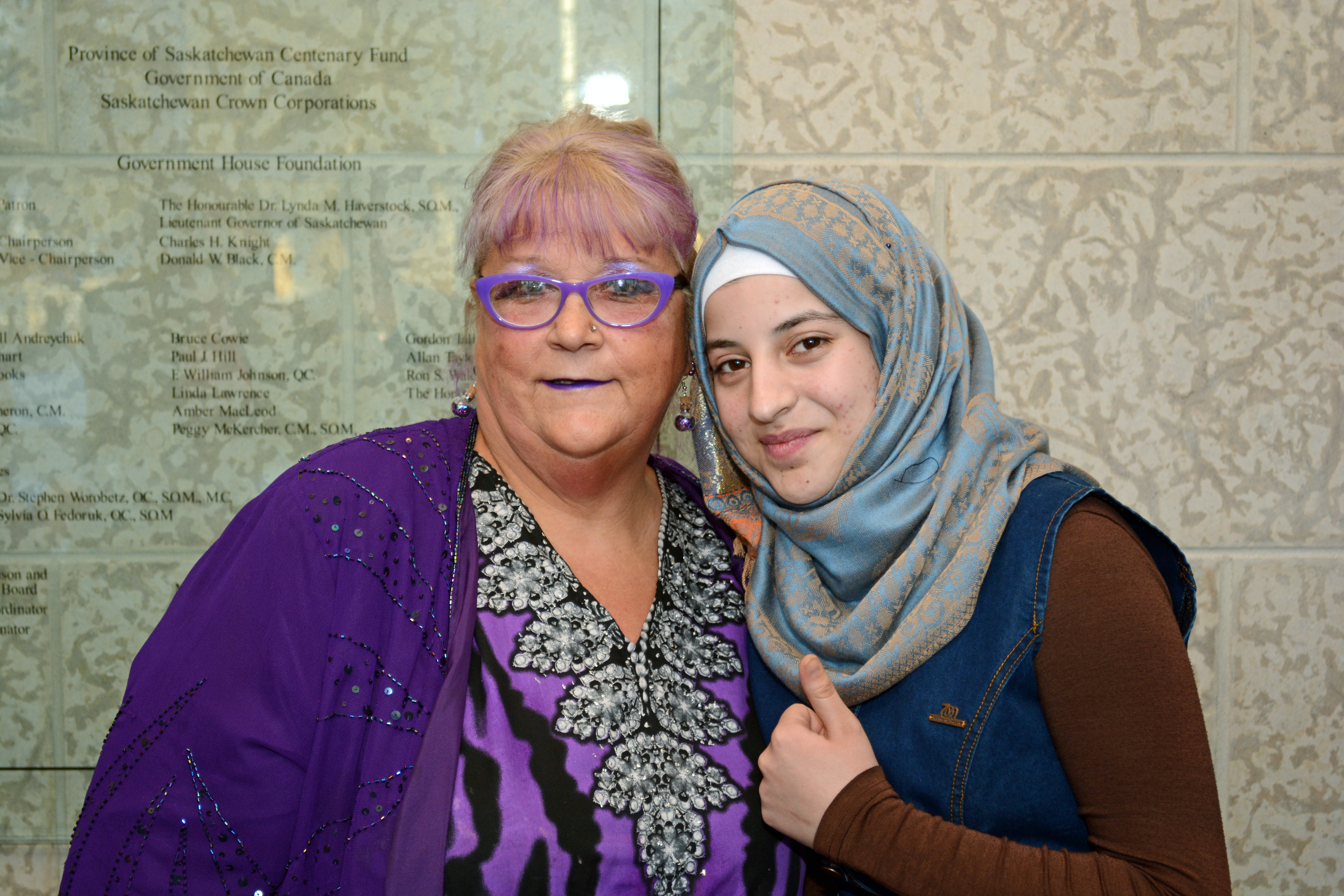 Student Shares Stories to Create Connections
Albaradan arrived to live in Regina with her family three years ago, after three years of living in a refugee camp in Jordan. Now a 17-year old student at Regina’s Sheldon Williams Collegiate, Albaradan loves living in Saskatchewan and is especially happy that her family – her parents and five siblings – are all here together.

Last year, Albaradan, an English as Additional Language (EAL) student, participated in the first Mindful Creative Writing class the school offered. The program, led by innovative teacher, Kyla Wendell McIntyre, gave Albaradan the opportunity to share her life experiences through poetry and public speaking, all in English. “I have always loved creative writing. I love sharing my feelings and telling my own story,” she says.

The class is inclusive and diverse, with students from many cultures writing and sharing their stories, giving each other feedback and learning to revise their own words. She says that poetry and stories are her favourite forms to write because “a poem is a small thing that can mean a lot.”

Not only does Albaradan write poetry, she also shares her story through public speaking. She’s taken lead roles to organize and perform at Sheldon Williams’ multicultural events, encouraging her peers to ensure that all the cultures of the school are represented. She has also spoken to professional groups at several events.

When asked if she enjoys performing for a crowd, she says she may feel a little nervous, but she knows it is an opportunity for her to gain experience and to hone her language skills. “The best thing about writing and practicing for an event is that I listen to myself, and focus on my own voice.”

Albaradan’s award included a $500 prize, which she is saving for post-secondary studies.