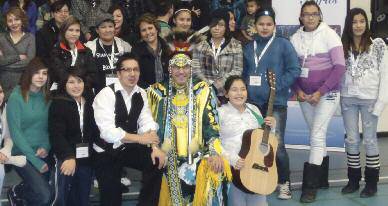 Tapping into the Northern Spirits

As reality shows, such as Canadian Idol or So Youth Think you Can Dance, continue to capture the attention of aspiring talent, Saskatchewan’s northern youth have an even better opportunity to show their stuff.

For the past four years, Northern Spirits has brought together 50-70 youth from different northern communities to participate in a workshop where they can get hands on experience in music and visual arts. Youth learn a range of skills required to put on a professional talent showcase. They learn set design, stage management, production, and public speaking, as well as working with a live band and practicing their skills in a real radio station.

“It’s a great opportunity for youth interested in developing their music, arts and culture skills,” says Judy MacLeod- Campbell, Program Manager for Culture and Community Development, Northern District for Sport, Culture and Recreation. “Many youth who register for the program have never performed in public. Through Northern Spirits, they get a chance to perform and build their confidence, as well as getting experience and mentorship from industry professionals.”

Many participants from past showcases have gone on to put their training to use. After their Northern Spirits experience, northern hip-hop artist Blu went on to record his own CD and fiddler Tristen Durocher continues to perform for audiences at different events.

“They will all tell you that Northern Spirits helped them overcome shyness when singing and performing,” says MacLeod- Campbell.

This year, Northern Spirits received an Aboriginal Arts and Cultural Leadership Grant to help enhance the mentorship opportunities for the youth.

Northern Spirits was originally developed by Musqua Entertainment in their efforts to mentor youth in their confidence to work in this area. According to MacLeod- Campbell, “Musqua Entertainment holds annual auditions for Voices of the North and after having several youth try out, they realized that some additional training would help them understand the process and increase the quality of their auditions and opportunities.” They approached the Northern District for Sport, Culture and Recreation to help them extend the reach of the program.