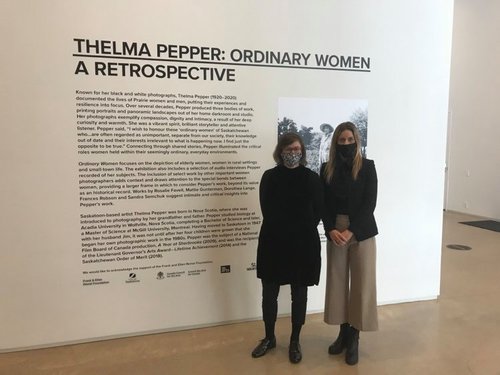 Thelma Pepper: Ordinary Women. A Retrospective highlights the life’s work of one of Saskatchewan’s preeminent senior artists, Thelma Pepper (1920-2020), an important photographer, feminist and activist. Known for her black and white photographs, Pepper documented the lives of prairie women and men, putting their experiences and resilience into focus. Connecting through shared stories, Pepper illuminated the critical roles women held within their seemingly ordinary, everyday environments. Her photographs of elders are exemplified by compassion, dignity and intimacy, coming from her deep curiosity and warmth, putting her subjects at ease. Pepper was a vibrant spirit and brilliant storyteller.

Thelma Pepper produced three bodies of work, printing the portraits and panoramic landscapes out of her apartment darkroom and studio, each series published in a monograph. In Decades of Voices: Saskatchewan Pioneer Women (1990) she combined photographs, a script and recorded interviews of women, all over the age of 85, gathered over eight years. Pepper said, “I wish to honour these ‘ordinary women’ of Saskatchewan who … are often regarded as unimportant, separate from our society, their knowledge out of date and their interests irrelevant to what is happening now.”

Pepper’s landscape photography evolved directly from her portrait work, as she often travelled to the small towns where her subjects lived. The Spaces of Belonging (1996) series began as an exploration of the towns along Highway 41 that were slowly disappearing or already gone. Untie the Spirit (2004) highlighted the dynamic lives of the elders living at the Sherbrooke Community Centre, a long-term care facility in Saskatoon.

Pepper was introduced to photography early in life, as both her grandfather and father were amateur photographers. Before embarking on her own creative path, her interest in photography was reignited by developing many of their negatives, recalling the techniques she learned as a young girl in her father’s darkroom. The exhibition includes some of these early images as well as a selection of works by Rosalie Favell, Mattie Gunterman, Dorothea Lange, Frances Robson and Sandra Semchuk—offering intimate and critical insights into Pepper’s work. Ordinary Women focuses on the depiction of elderly women, women in rural and small town life, and a selection of audio interviews Pepper recorded. Including select work of other important female photographers adds context and enhances the perceptions of women, providing a larger frame in which to consider Pepper’s work beyond its value as an historical record.
More Info
Remai Modern 102 Spadina Cres E Saskatoon SK S7K 0L3
Cost: 12.00 General admission rates; other rates available.