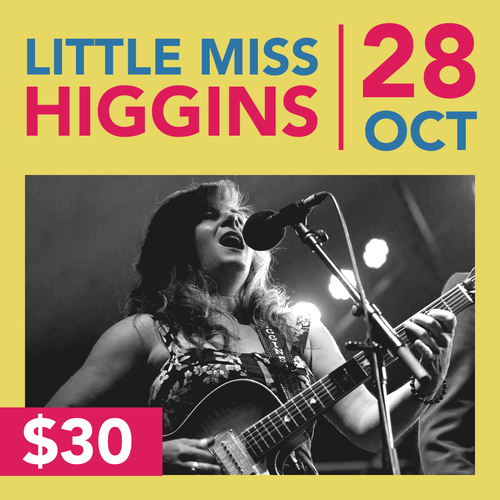 From the Great Northern Plains, Little Miss Higgins struts and serenades her way onto any stage playing music brewed in early country blues, jazz and folk. Playing, touring, collaborating, and recording for over 15 years, this musician and mother now navigates her time through performing and parenthood.

Her six independently released albums and artwork have received many awards and nominations, including a Canadian Folk Music Award nomination for her 2017 collection of songs, MY HOME, MY HEART. Recorded at The Song Shop in Winnipeg, Manitoba, this album’s sound remains true to Higgins’ roots, but ventures into new territory. Co-produced with Scott Nolan and engineered by Jamie Sitar of Outta Town Sound, this album is an effortless addition to her impressive body of work.

Little Miss Higgins (aka Jolene Higgins) was born in Brooks, Alberta, and raised in Independence, Kansas. Music entered her life early. “When I was about four my dad brought home an old mini-grand piano and told me it was mine. I carved my name in the side of it and then I had to start taking piano lessons.” As a songwriter and musician, Higgins has been influenced by a range of artists from Memphis Minnie and Billie Holiday to Joni Mitchell and Dolly Parton as well as the vast array of Canadian and International musicians and bands she has had the fortune to see live or even share the stage including kd lang, Corb Lund, Buddy Guy, and Maria Muldaur.

Her first two studio albums Cobbler Shop Sessions (2005) and Junction City (2007) superbly showcase Little Miss Higgins as a highly-developed songwriter as well as a remarkable country blues performer in a style gracefully highlighted by her partner at the time and guitarist Foy Taylor and occasionally a handful of other roots musicians.

She has earned multiple accolades including JUNO and Maple Blues Awards nominations and won as Outstanding Blues Recording at Western Canadian Music Awards and Favourite Blues Artist/Group or Duo of the Year category of the 8th Annual Indies Awards.

Higgins has appeared live on many CBC radio shows such as Stuart McLean’s Vinyl Café, Michael Enright’s Sunday Edition and Rich Terfry’s Drive. Her talents have also been put to use in the creation of a dust-bowl folk opera in collaboration with the Old Trout Puppet Workshop of Calgary, Alberta.

Catch Little Miss Higgins October 28th, 2022 at Blenders! Tickets are $30 until October 1st, then $32 with the new pst, and are available at Swift Current Pharmasave or online at eventbrite.com. Doors at the Lyric Theatre will open at 7:30pm and the music begins at 8:30pm. Blenders thanks Voth’s Brandsource for sponsoring this show.
Buy Ticket
The Lyric Theatre 227 Central Ave N Swift Current SK
Cost: 30 General Admission, all ages, rush seating. Buy before Oct 1st and save the new PST.