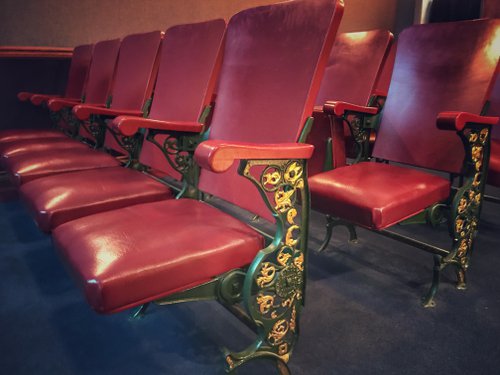 Holiday Films at the WDM

Watch a selection of animated and live-action short films from the National Film Board with a winter theme screened in the Western Development Museum - Moose Jaw's Saskatchewan Theatre.

The Great Toy Robbery (1963), Jeff Hale, 6 minutes
This short animation stars the world’s most-wanted good guy: Santa Claus. In this spoof of the Wild West, good triumphs over evil, but not before the evil robbers and their innocent victims have romped through some odd situations.

The Joy of Winter (1962), Jean Dansereau & Bernard Gosselin, 14 minutes
How Canadians adjust to their long, snowbound season. Filmed with humour, The Joy of Winter shows people making the best of what they cannot change. From tiny tots to human polar bears the film leaves no doubt that, in the eyes of many Canadians, winter may offer more attractions than summer. Film without words.

Ludovic – Let it Snow (2011), Sylvain Lavoie, 12 minutes
It’s a nice winter day outside, and Ludovic and George are busy making snow bears. But George end up making a snow dragon. When their two snow creatures come to life, a nice game of red light-green light is great fun, until it’s a run to avoid the snowball blowing off of the snow dragon’s nose!

Snow Cat (1998), Sheldon Cohen, 23 minutes
A grandmother tells her young grandchild the moving tale of a lonely girl and an unforgettable magical cat in this animated short narrated by Oscar®, Emmy and Tony award winner Maureen Stapleton. The film is based on a short story written by Dayal Kaur Khalsa and adapted by two-time Governor General’s award recipient Tim Wynne-Jones.

It’s Snow (1974), Gayle Thomas, 5 minutes
Colour cut-out animation inspired by the shape of snowflakes and touched with the airy magic of these fragile designs. While music tinkles invitingly, snowflakes roll and whirl, pulse and glitter, shining with the many hues of twinkling lights. Made without words, this is a joyous film to please the fancy and captivate eye and ear.

The Rink (1962), Gilles Carle, 10 minutes
This short, silent film captures a Sunday afternoon at a community skating rink. Iconic Quebec director Gilles Carle has the camera follow toddlers learning to skate, young girls flashing their skates and boys decked out in the colours of their favourite hockey teams. A picture-perfect moment on a bright winter’s day.