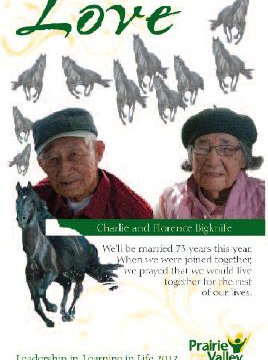 Through the First Nations Role Model Poster Project, Grades 10 to 12 students in Michele Schwab’s classes are highlighting First Nations and Métis role models in the Balcarres area. This project is funded through a Treaty Smarts grant, which is offered by the Saskatchewan Arts Board in partnership with SaskCulture and the Ministry of Education.

“We applied for the grant so we could try and showcase First Nations and Métis role models in our community,” Schwab explains. “We wanted our kids to have some positive faces to identify with in terms of good role models. To actually see people they know from their own communities is important.”

First Nations role models are particularly important in the Balcarres area, which is located near the Little Black Bear, Peepeekisis, Okanese and Starblanket First Nations. The posters are based on the seven sacred teachings of the Aboriginal way of life – love, respect, courage, honesty, wisdom, humility and truth.

The final product is a collaboration with the Graphic Communications Program at the Saskatchewan Institute of Applied Science and Technology (SIAST) in Regina, but the students have plenty of work to do before it gets to that stage.

Upon choosing their role model, Schwab’s students got to work researching their subjects, conducting interviews and taking photographs. After coming up with a preliminary sketch, they partnered up with students in the SIAST program to design and print their posters. The end result is a professional product. Two years after the program first started, that product is starting to pile, up with 48 role model posters completed to date.

“It’s all based on who the kids believe are role models,” says Schwab. “You take the time to honour people that are important and do good things.

“Some of the role models have been peers. Some are people in the community that have done exceptional things. We’ve also covered most of our chiefs.”

Once the posters are completed, they are displayed in the school and throughout the community, including the local band offices and health centre. The posters are also on display at SIAST.

“What most of the kids got from this project was the fact that there are some really significant leaders and role models right here in our communities,” Schwab says. “The other thing the kids really get is that most role models that you see out in the media are predominantly white people. The opportunity to specifically showcase First Nations role models is important. This is a really nice way for us to showcase the positives, dispel the stereotypes and showcase some fantastic First Nations people out there and the wonderful things they do.”

What started as an idea with the Prairie Valley School Division’s First Nations and Métis Consultant has grown into something much larger. Schwab believes there are opportunities to expand it outside her community and school division.

“It’s really a great project and every year the kids look forward to it,” she says. “It’s so well received. It’s morphed itself into something way bigger than we originally thought. We’re not sure where it’s going from here, but it is a big deal.”