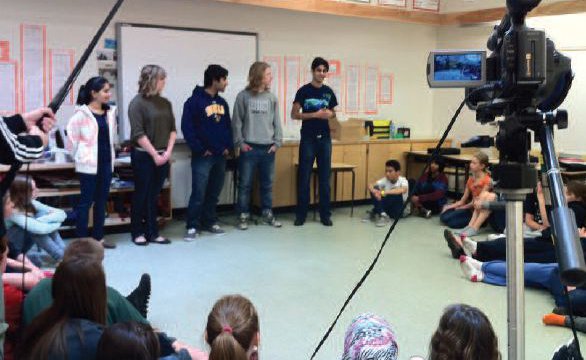 A creative workshop is opening doors to new media for newcomers to Saskatoon and helping them share their stories with the community.

A non-profit organization that uses creative media to empower young people, Youth Media Workshop approached the Saskatoon Open Door Society about a project that would expose students, aged 13 to 18, to different forms of media, including print and video. While previous workshops involved students from different ethnic backgrounds, as well as mixed backgrounds, this project specifically targeted the Burmese community in Saskatoon.

“It was a media project basically to do with creative expression,” says Artin Lahiji, who coordinated the project for Youth Media Workshop. “They worked on documentaries and were basically telling their story – how they ended up here and all the problems and obstacles they encountered. They expressed their feelings about what happened and the reasons they left their homeland.”

Through the use of translators, the instructors and students were able to communicate through the universal languages of technology and the media. Although their parents may not be as conversant in those languages, many were pleased with what the students accomplished in the program.

“Parents want their kids to get involved with technology because we are in the age where kids are exposed to the media in different ways,” suggests Anahit Falihi, manager, Settlement and Family Support, Saskatoon Open Door Society.

“The parents like these workshops because they like to get their kids involved with something that is more educationally directed. They want some direction for their kids.”

That direction was something the students received and enjoyed, particularly for one of the students. Lahiji adds “we recognize the value of young people from all cultures. We wanted them to have access to media practices to express themselves. That was our goal.

“It was very good. They really enjoyed communicating their ideas through the media. One of them is now interested in pursuing film studies in the future.”