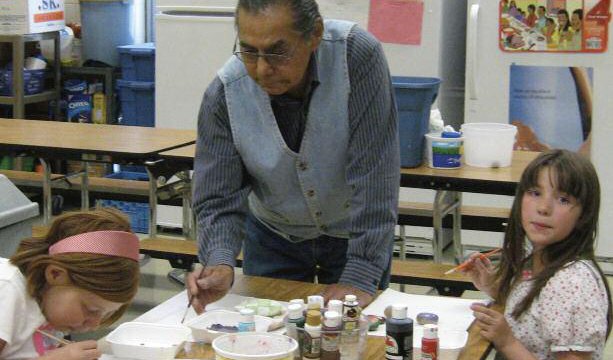 Common Weal Continues to Connect Communities and the Arts

Every community has a challenge to face. Through its work, Common Weal has shown how arts and culture can be used to help nurture positive change in communities and help them face their adversity.

The inner-city seems to be constantly challenged with the hard issues of gangs, violence, drug abuse and crime. Common Weal has shown how arts and culture could be used as a means of intervention by establishing an Aboriginal Cultural Mentorship Program in north-central Regina.

Saskatchewan artist Gordon Keewatin was brought on to help bring traditional and contemporary arts and cultural practices to youth in Regina’s inner-city neighbourhood. “By encouraging children in their artistic abilities,” Keewatin explains, “they discover the truth that they are individually gifted and can use their gifts to express their own viewpoints and contribute in a positive way to the world around them.” Keewatin worked as Artist-in-Residence in the North Central Regina from 2008-2009, thanks to funding from the Aboriginal Arts and Culture Leadership Grant, supported by Saskatchewan Lotteries.

While not always community-specific, the projects coordinated by Common Weal continue to blend the arts with different community issues, such as the lives of new immigrants or those living with disabilities.

In 2010, Common Weal in partnership with Regina Open Door Society gave children of immigrants living in Regina the chance to express themselves through photography in Through their Eyes: Photographs by Immigrant and Refugee Youth. Artistic Director Gerry Ruecker explains that expressive arts, such as photography, have historically had a key role in civic engagement. “These youth often face serious challenges in the areas of identity, language, education, and employment,” he says. “By introducing them to methods to help them express themselves, they can release some of the stories and images they have within them, as well as forge a common bond with each other.” The exhibition, funded by the Government of Saskatchewan was exhibited in the foyer of the West Harvard Tower last August and was on display for Culture Days at the CBC Building in Regina.

As well, Common Weal was able to partner with the South Saskatchewan Independent Living Centre to provide an opportunity for those living with disabilities to express their unique culture. Saskatchewan artist Traci Foster was hired as an artist in residence to offer programming that was accessible and adapted to suit a range of individuals, from quadriplegic wheelchair users with limited fine and gross motor skills, to individuals with psychiatric disabilities who are impacted by social anxiety and mood disorders, to people with Fetal Alcohol Syndrome Disorder (FASD) and cognitive or developmental disorders. “At this time,” explains Joanne Shannon, executive director, Common Weal, “there is no other programming available which specifically addresses disability culture and recognizes the need for social accessibility.”

The seeds of the organization known as Common Weal Community Arts Inc. were planted back in 1992, when artists and residents of Fort Qu’Appelle worked together on a community play based on the oral history of the area. The play helped deal with issues of colonialism and racism and fostered relationships among different cultural groups.

In May of 2010, the organization hosted a three-day conference, “Connect: Towards a Socially Engaged Aesthetic” to explore how to engage communities and the public. “The conference really built on our vision of exploring the role of community- driven art in promoting social change,” said Shannon. The conference raised the profile of the organization as a leader in community-engaged arts in Canada, as well as featuring performances by Saskatchewan artists, including The Project and Rouge Gorge. The conference received funding from the Capacity Building Grant offered through SaskCulture.