Connecting with your Inner ‘Story-ior’

Helping Indigenous youth find their inner story warrior, or ‘story-ior’, was behind the programming and initiatives leading up to the Ânskohk Festival this past year.

In addition to the Ânskohk Festival held in October 2017, the Saskatchewan Aboriginal Writers Circle (SAWCI) was able to offer two new outreach activities, Voices of Today and Birth of a family, thanks to funding from the Canada 150 Fund, delivered by Canadian Heritage. SAWCI, which aims to build communities that nurture Indigenous story and art, was one of five organizations that participated in the Resilience and Respect: Canada 150 & Beyond partnership.

This year, the goals were “achieved by celebrating and showcasing Indigenous writers and by nurturing, mentoring and connecting Indigenous ‘story-iors’ with supportive resources in the community,” explains Karon Schmon, SAWCI board member. The organization has often found themselves facing financial challenges, so “the opportunity to apply to Canada 150 funding through SaskCulture provided an opportunity to change both what SAWCI does and how it is done. We were able to focus on two activities: community outreach to areas of the province beyond Saskatoon; and a special Anskohk Aboriginal Literature Festival.”

Leading up to the Ânskohk Festival, SAWCI began its community outreach began with a new partnership with the summer writer-in-residence program run by Common Weal Community Arts and the John M. Cuelenaere Library in Prince Albert. Voices of Today included five young Indigenous writers who had been working throughout the summer with the writer-in-residence, Lynda Monahan. The youth took turns reading their original writings. Shmon says the event was well attended, and seats were full of family, friends and interested public. “Both new partners felt the event was a huge success and were extremely happy to partner with SAWCI,” adds Shmon. 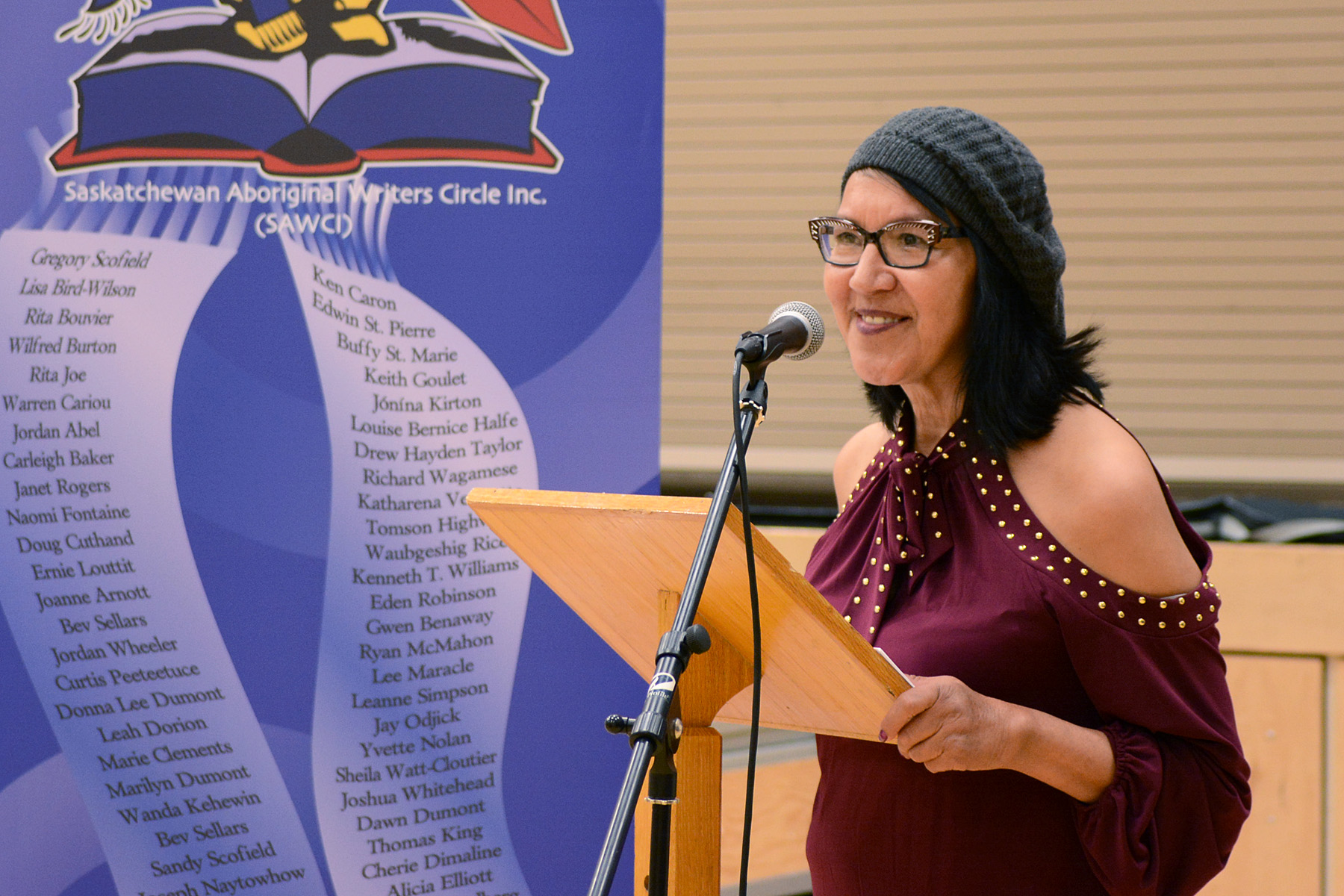 Other outreach activities included the screening in Saskatoon of Birth of a Family, a story about the reuniting of siblings who survived the ‘60s scoop’. The screening was hosted by SAWCI Board Member Colleen Charlette, herself a ‘60s scoop survivor’, who engaged students in a critical dialogue; and writing workshops. “The writing workshops were small but impactful for the students,” says Shmon “Several were inspired to continue developing their writing skills.”

In addition, SAWCI was also able to expand its outreach to the northern communities of Ile-a-la-Crosse and La Loche, as well as Prince Albert, where people were encouraged to begin and continue their writing.

October 2017, SAWCI hosted a special Ânskohk Festival held in October that showcased the vitality of Indigenous languages in the literary arts. The event had an interactive format between the presenters and participants that provided many opportunities to share and learn. The attendees enjoyed a mixture of panels, speakers, workshops, storytellers and keynote presentations on Indigenous voices and issues. An open mic event also invited emerging and established writers to present their work. “The event was lively and interactive, and the tables were filled with discussion and laughter,” says Shmon.

"The writing workshops were small but impactful for the students. Several were inspired to continue developing their writing skills."

In total, approximately 25 literary artists and publishers contributed to the festival. According to Shmon, the SAWCI board feels the festival was a success and would like to continue with it in the future.