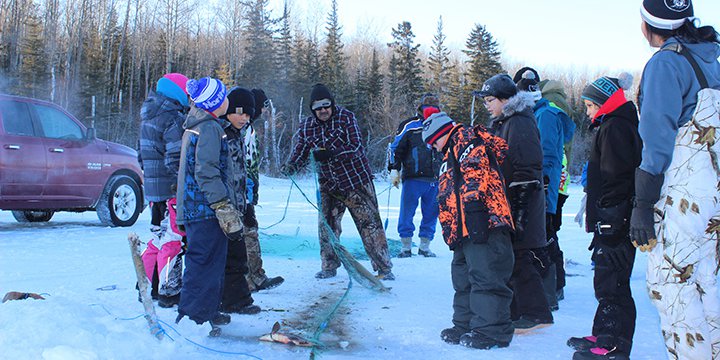 Learning to Live on the Land

As the saying goes, so much of the future lies in preserving the past, and recently a group of students came together to preserve the future of Dene culture in Saskatchewan.

Thirty students from Buffalo River School, in the community of Dillon, recently took part in an historic Dene cultural camp. The students, who ranged from grades four to nine, travelled 150 kilometres to a cabin at Vermette Lake for the three-day event. “They experienced first-hand what it’s like to stay in the bush,” says Laurette Chanalquay, School Principal, Buffalo River School. “It is important that not everyone gets the chance to go out on the land.” According to Chanalquay, a group of six Elders (three male and three female) who were familiar with the area accompanied the students during their culture camp experience, which included setting and checking fishing nets, cleaning and filleting fish, snaring rabbits, cooking bannock and attending a sweat lodge ceremony. Other activities included listening to Dene Elders stories and participating in a sharing circle.

“The idea of culture camp is important,” says Chanalquay. “The youth learn traditional practices and can use their skills whenever they decide to go out on the land and fish. If they know those skills, they can be prepared for their future and hunt food for their families.” These practices are important to their understanding of their identity as Dene peoples.

She adds that during their time at camp, students overcame several challenges, including a “white out” snow storm with zero visibility, where temperatures dipped below 40 degrees Celsius. “The students were advised to stay indoors and it was a teaching moment from the Elders,” Chanalquay explains. “They learned that whenever a snow storm happens, they must seek shelter and remain there. The time was well spent and everyone enjoyed their activities. Most said they wanted to stay another two nights.”

The school will continue to facilitate cultural camps in the near future, says Chanalquay. “We want to make sure all students get a chance to experience Dene culture and the great outdoors during the four seasons. It was a great trip—everyone was very thankful and felt good about it.”