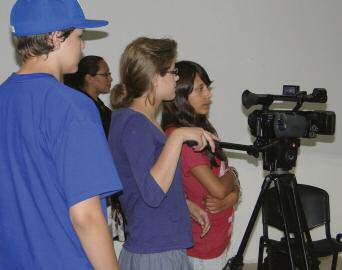 In March 2006, the University of Regina’s department of Media Production and Studies brought in wellknown Canadian Aboriginal filmmaker, Alanis Obomsawin, as a keynote speaker for what would turn out to be mispon’s first biannual film festival. Held in Regina, the festival was designed to bring Regina’s First Nations community together for a series of screenings, guest speakers and networking opportunities for people interested in storytelling through digital media.

Janine Windolph, mispon president, says that the success of the initial festival met a community need. “There were so many local filmmakers looking for opportunities to show their work outside the province. We just gave them a chance to showcase their work here and show them that support for their stories could be found locally.” The festival had such a positive response that mispon applied for non-profit status the following year to continue the festival’s momentum. “Everyone has the ability to tell stories. They just need the tools to share what they know,” Windolph added.

In addition to presenting guest speakers like Yukon-based animator, Carol Geddes, the festival provides opportunities for aspiring Aboriginal filmmakers to pitch their production ideas to industry representatives. For the past four years, Aboriginal producers and broadcasters, such as the National Film Board (NFB), the CBC’s Aboriginal Centre, SaskFilm, and APTN, have all had representatives at mispon.

Cardinal is a longtime NFB filmmaker, probably best known as a regular director of episodes of North of 60 and The Rez. “He is there giving feedback on how to push yourself, and sharing his path from an aspiring filmmaker to an established Canadian filmmaker,” she notes. “People leave with confidence, seeing credibility in their ideas and a confirmation that they can be successful in sharing their stories too.”

While the four-day festival has roots in the filmmaking community, mispon uses philosophies of traditional storytelling as well. Filmmakers maintain the core of traditional storytelling while placing their stories on digital media. “A movie is one piece of the puzzle,” explains Windolph. “By having the artist at the screening to tell his or her story, the audience has a broader understanding of the film. We encourage everyone to share related knowledge in the form of their stories and experiences as related to the theme of the film. It’s a way of learning from the artist and from the people you are sitting with.”

In the year between festivals, the mispon members are equally active, focusing on community partnerships, increasing memberships and aligning key dates in the community with their own activities. For instance, Neil Pasqua successfully pitched his film, My Grandfathers TeePee, at the 2010 festival and mispon hopes to feature the film at the 2011 Aboriginal Day celebrations. This integrated approach to supporting the filmmakers has been a key to mispon’s success.

Over the past few years, mispon has received two Multicultural Initiatives Fund grants designed to support development of young filmmakers. It concentrates on professional development by holding smaller events during their non-festival year as a way to continue networking efforts while mentoring the board through the process.

Next year, the mispon: A Celebration of Indigenous Filmmaking Festival is set for the winter solstice. Fittingly, the festival will focus on stories relating to the mystique and international Indigenous prophecies for the year 2012.