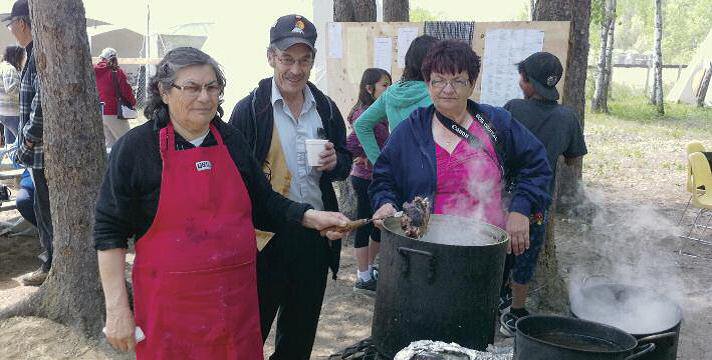 Thanks to support from a Métis Cultural Develop Fund Grant (MCDF), offered by SaskCulture, in partnership with Gabriel Dumont Institute, a week-long cultural event called Reconnecting all our Relations and Generations was held in the Village of Pinehouse, SK on June 5-10, 2011. Representatives from 25 northern communities brought along elders, young students and other community members, resulting in participation of over 800 people throughout the week.

Several keynote speakers shared their knowledge with those in attendance. “Willie ermine of Sturgeon Lake came to speak about the historical treaties, “says Natomagan. “Even though we’re Métis, we’re still connected to them.” Russ Merasty spoke about fostering Aboriginal and non-Aboriginal relations. “Russ is a Cree-speaking, high-ranking RCMP officer,” Natomagan adds. “He receives a lot of respect.” Calvin Helin, author of Dances with Dependency, talked about the importance of Aboriginal partnerships and Denny Morrison organized the Grand march and pow wow.

“We were so proud because we never had held a pow wow in our community before,” says Natomagan. “We learned how to set up a tipi, and offered tipi teachings including what the colors mean. We also had the Ashom Stompers come all the way from Manitoba to teach us the Métis jig.”

Beyond the keynote addresses held each day, activity stations were set up throughout the camp community. Activities included: skiff-building and paddle-building workshops, rabbit and small game skinning workshops, smoke house workshops, as well as opportunities for kids to learn how to set up canvas tents. There was also a trade fair with 14 agencies represented to share information with the community.

“We were overwhelmed by the response,” remarks Natomagan. “It was supposed to be a one-time deal, but the communities are asking for us to do it again this June.” Pinehouse had hoped to hand the event off to a different community, but is planning to host it once again. “Hopefully another community will do it next,” he adds. “We had 20 volunteers working all week making sure there was food, coffee and moose meat. They didn’t get much sleep!”

Natomagan plans on re-applying for the MCDF grant through the Northern Village of Pinehouse to continue and build on the success of the Reconnecting all of our Relations and Generation event for next June of 2012.