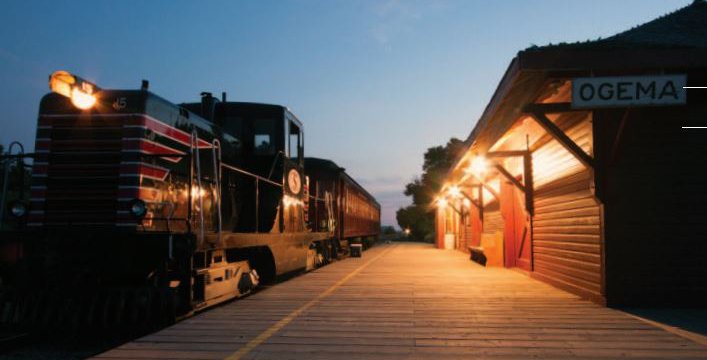 The Town of Ogema fought back from rural decline with the development of a railway tour that would help steer the community towards a brighter future.

Cheryl Generous, founding member and CEO of Southern Prairie Railway, says the idea to open a tourist train in the Ogema area began to take shape in 1998 when a group of residents, who had a strong belief of the importance of heritage preservation, took the initiative to bring the former railway station back to life. The team went on a search and found one that was being used to store grain, and was identical to their former station. While the building’s restoration was taking place, people started to imagine operating a tourist train.

The town of Ogema paid to have a feasibility study done and found their dream was possible, but were missing people who knew how to operate trains. Red Coat Road and Rail had saved the rail line but still needed people with specific rail qualifications. When Generous’ family moved to the region, they brought the knowledge and experience required.

Wayne Myren, Ogema mayor, former co-chair of the Southern Prairie Railway, says the Deep South Pioneer Museum, which is supported by SaskCulture’s Museum Grant Program, is on the train’s route and has seen its attendance quadruple in a season. The tourist train began departing from the station in Ogema in 2012, and has welcomed over 11,000 riders. The train ticket includes admission to the museum, which is home to 30 buildings, artifacts and over 125 pieces of functional equipment. “The Museums Association of Saskatchewan and the province were looking at it and saying ‘these have got to be the wrong numbers, how come you’ve got that many people?’” he adds.

Trains run Saturdays and Sundays from May to October. The tours include daytime trips to neighbouring communities, and special occasion and late afternoon trips with meals and entertainment. Visitors from all across Saskatchewan, Canada and the world, have come to Ogema to ride the train.

A popular tour of the past year was the Rum Runners Special where visitors were encouraged to dress up as gangsters and flappers. Dancers also performed the Charleston and a band that plays music from the roaring 1920s were featured, as the guests were served Italian food, which was introduced to Canada during that time period.

Generous believes the tours’ appeal is that they incorporate history lessons in an interactive environment. “When we offer a dress-up train we get so many people coming dressed up because they want to interact, they want to touch, they want to be involved,” she adds.

Local businesses and the community are also reaping benefits of the train tours. “We have witnessed two businesses open, one is a caterer and the other is an ice cream parlour. The museum has the ability to hire employees and the two restaurants are doing quite well,” says Generous. Plans are being made to do more promotions for the campground and motel, and a new ‘bed and breakfast’ is also opening. While volunteers maintain, rebuild and do the work on the equipment and sit on the board of the Southern Prairie Railway, there are eight, part-time, summer employees and one full-time employee hired from May to October.

“A lot of people look at small communities and just write them off as dying,” says Myren. “Our community, the town of Ogema, opted to buy-out of rural decline 20 years ago, and we won’t take ‘no’ for an answer. The tourism has just been another part of saying ‘we can do it here’.”