For the first time, teachers from across Canada were invited to sign up their Grades 3-8 classes for a series of LIVE Arts broadcasts as part of Canada’s 150 celebrations.

These curriculum-based lessons featured Indigenous artists living in Saskatchewan and collaborators from other areas of Canada. The artists focused on the topics of resilience, respect and reconciliation. The opportunity to collaborate with other Indigenous artists was made possible thanks to the support from Canadian Heritage Canada 150 fund.

Established in 2005, LIVE (Live Interactive Video Education) Arts engages teachers and students in an interactive distance learning experience. Professional artists provide grade-specific broadcast programs in drama, dance, music and the visual arts through the Saskatchewan Ministry of Education’s LIVE Network. Even the most remote rural communities are reached by the program, with more than 30,000 Saskatchewan students participating in 2016.

Laura St. Pierre, former artist program manager, LIVE Arts, says that organizers looked for a variety of types of artists to lead the special broadcasts. “We selected Saskatchewan artists from the visual arts, music and theatre disciplines. We invited them to chose another artist they wanted to work with who is from outside Saskatchewan,” she says. “We gave artists a fairly free platform to discuss and create programming based on what they felt reconciliation should be about.” 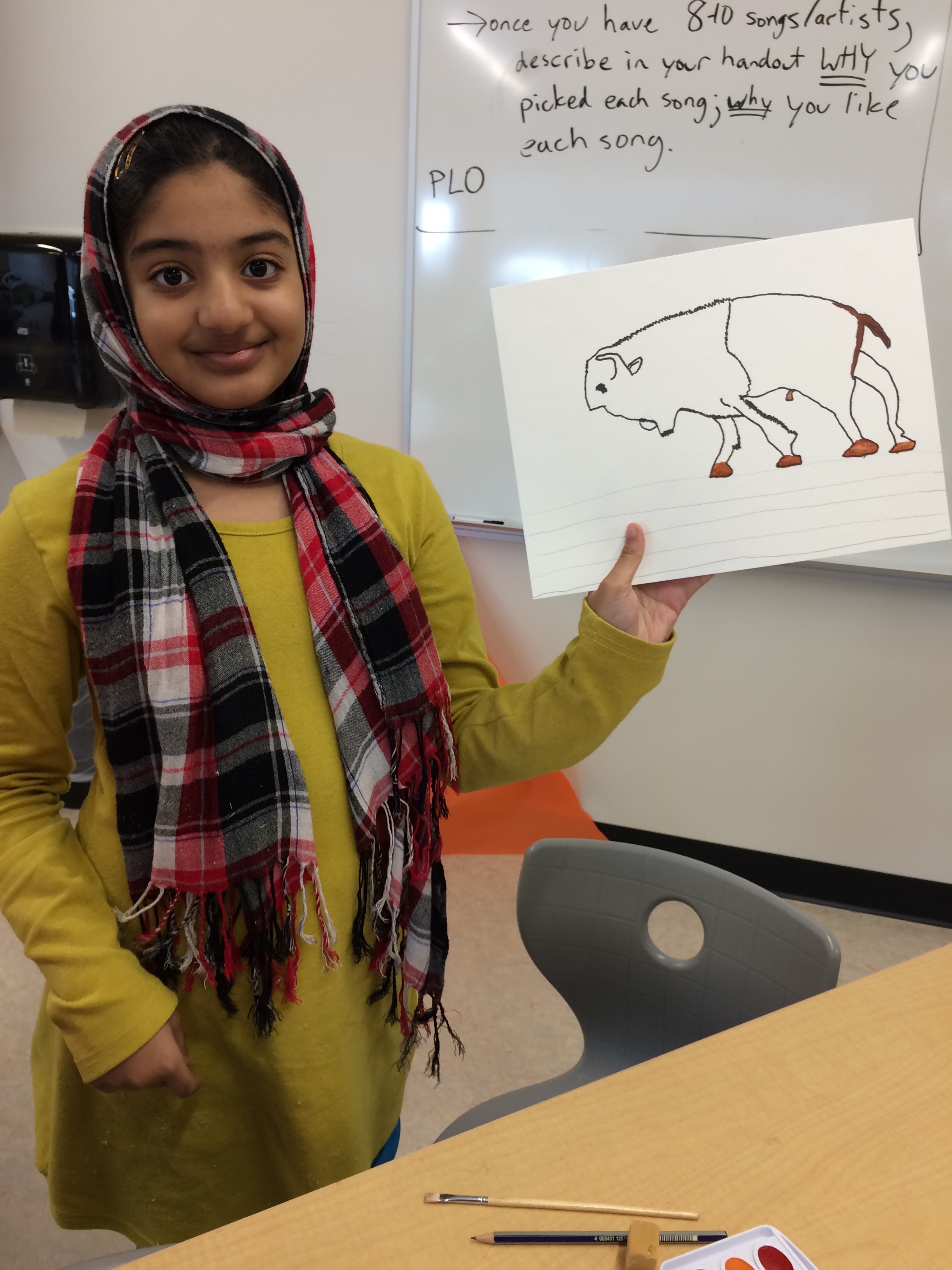 InfoRed and Emotionz explored the four main elements of hip hop culture (MCing, DJing, graf writing and breakdancing). They demonstrated how the art forms of hip hop have the ability to educate and connect people with Indigenous history. Students had the opportunity to practice rapping, beat-boxing and graf writing during the broadcast, as well as and to writing a song collectively.

Nolan and Olson, both First Nations theatre artists, led students through a process called storyweaving, a theatrical technique using gesture, voice, song, movement and repetition. The pair use this technique to create work to share stories from their Indigenous perspectives. Students and artists examined their personal connections to the land and to each other and created a short theatre/movement piece that explored how we live together. 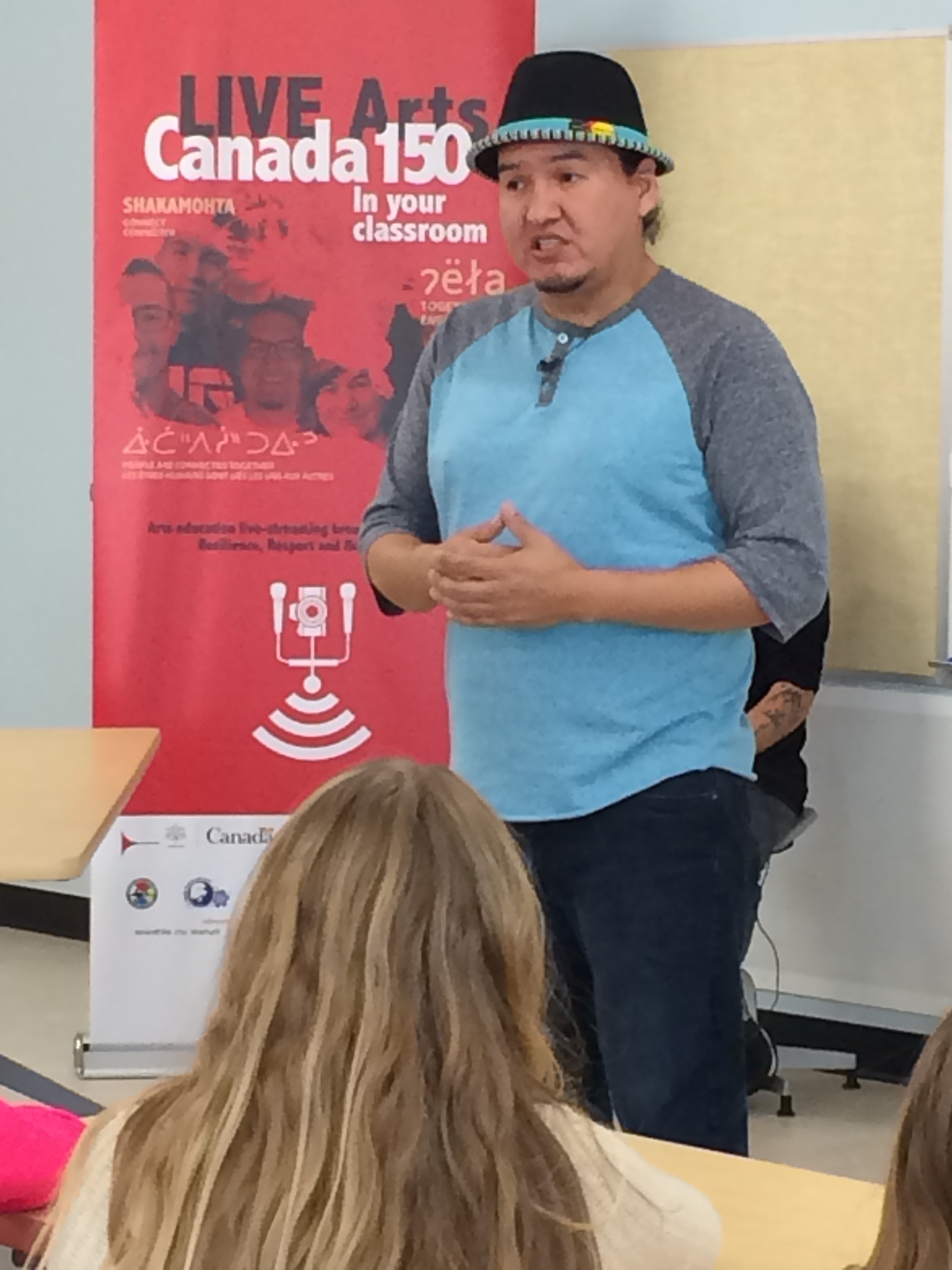 Students experiencing the broadcasts from a distance were also able to participate. Students at St. Mary School in Saskatoon wrote this story during the storyweaving broadcast:

"A mountain of ice carries three mistasinîy (big rocks in Cree) for hundreds of years. The ice slowly moves over the prairie. The warm sun begins to melt away the ice and rivers flow, carving the land. The grassland takes over and teems with bison, mammoth, giant deer and sabre-tooth cats, rubbing and hiding among the mistaseny. European humans arrive and Saskatoon is built around the mistaseny, threatening their existence. The St. Mary students hike to the mistaseny and join in their ancient history."

Wesaquate and Johnston explored Indigenous stories and storytelling in their broadcasts. Students wrote their own stories and used them as the basis for a visual artwork that combines text, image and colour.

Zoé Fortier, LIVE Arts associate artist program manager, says the students participating in the broadcasts made a real connection with the artists. “The artists were so generous and so open to sharing their vulnerabilities,” she explains. “They talked about their parents’ experiences with residential schools and their own hardships. There was a rawness between the students and the artists. The workshops had moments of connection that were really touching and moving.”

More than 8,200 students from across the country tuned in for the LIVE Arts 150 workshops. Classrooms that missed the live broadcasts can contact LIVE Arts staff for a password to access the program’s archives at liveartsaskatchewan@gmail.com.