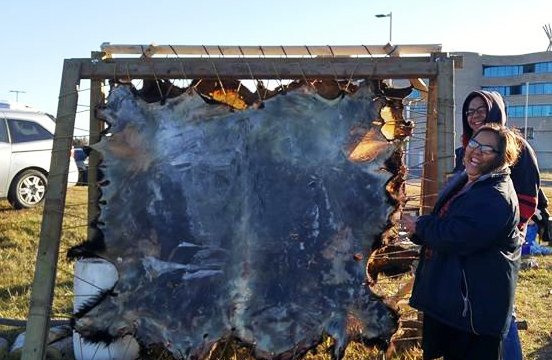 The saying goes that when it comes to the sacredness of the buffalo in First Nations culture, it is hard to say where the animal ends and the human begins.  A series of workshops is helping to revive that sacredness across the province.

Lorne Kequahtooway, from Sakimay First Nation, has been teaching local residents about the significance of the buffalo in First Nations culture, through buffalo hide-tanning workshops.  In April 2016, in his role as a Community Engagement Animateur (CEA) with SaskCulture, he was able to offer the hide-tanning workshops as a way to build engagement in communities. Several workshops, each lasting five days, were held in various communities around the province. “Hide-tanning is an art form that is being lost,” says Kequahtooway.  The Animateur, who also owns and operates, along with his wife Joely BigEagle, Tatanka Boutique out of Regina, says he took it upon himself to learn about the hide-tanning process. “We knew there was a need in the community for the knowledge [of hide-tanning] to be passed on,” Kequahtooway says. “Children today are lost in technology. We need to educate them about this tradition.”

Kequahtooway says that it took two years to find a mentor willing to teach him about the art form.  “People who know how to [tan buffalo hides] are few and far between. Everybody that knows how to do it works alone”.

After spending two days learning about the tradition in Manitoba, Kequahtooway and his wife began tanning hides in their backyard. Once he’d mastered the hide-tanning process, he began to run the workshops.  “The first day involves a sweat, and getting prepared for the ceremonial aspects of hide tanning, “he explains.  “The following four days are spent building the frame, stretching the hide, and doing the fleshing. On the final day, we cut out the hide.”

“We knew there was a need in the community for the knowledge [of hide-tanning] to be passed on. Children today are lost in technology. We need to educate them about this tradition.”

The first workshops took place at Sakimay First Nation and White Bear First Nation. “On the reserves, we kept the fire going for the duration of the workshops,” Kequahtooway says. “We brought sage for everyone, to smudge before they started working on the hide, for ceremonial reasons.”  Working as a CEA, he has offered the workshops in Estevan, Saulteaux First Nation and Regina. Recently, Kequahtooway facilitated a workshop at Regina’s Neil Balkwill Centre, which attracted close to 150 people, including nearly 60 children from Regina’s Mother Theresa Middle School.

Kequahtooway’s demonstrations draw between ten and 60 participants, with ages ranging from two to 80 years old. “There were some in their 70’s who had never seen it done, because of their residential school experiences. To have someone 20 years my senior say ‘Thank you for showing me this’, is very humbling,” he says.

While Kequahtooway has been sharing the experience as part of SaskCulture’s Community Engagement process for the past several months, the success of the workshops also spurred the creation of the Buffalo People Arts Institute, a non-profit organization devoted to buffalo teachings, and reviving traditional First Nations art forms.

“The buffalo was our life,” says Kequahtooway.  “The hide was used for tipis and making clothing; the meat was food, and the bones and horns were used for tools, weapons, or decoration. Nothing was wasted.”