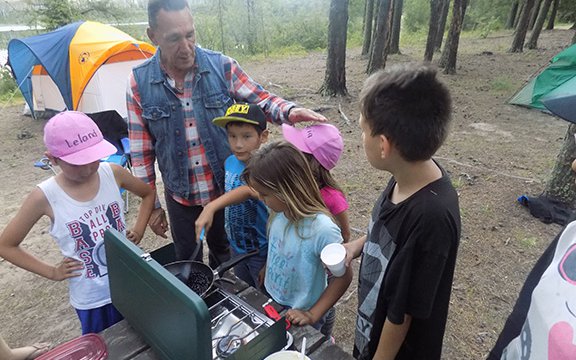 The Power of Plants

A new program is teaching youth the healing power of nature, as well as helping to preserve Indigenous culture.

This past summer, the Camponi Housing Corporation, a non-profit Indigenous housing provider in Saskatoon, held the Camponi Cultural Camp, a camp dedicated to helping youth acquire the traditional healing knowledge of plants – knowledge that has almost disappeared.

“It is a much needed program in terms of young people learning survival skills, stewardship, and how to live off the land.  It gives them the opportunity to make new friends, and to be a little more creative,” says Rose Richardson, one of the Elders at the Camponi Cultural Camp.

“A lot of the parents and grandparents didn’t learn these skills. Bringing it back in brings out the pride and dignity of our people.”

According to Angela Bishop, chairperson, Camponi Housing Corporation, there is a need for healing in the Indigenous community. “The dysfunction is owing in part to the intergenerational impact of experiences, such as residential schools and the “sixties scoop”. We bear witness to that on a daily basis in our homes. We have, in the last year instituted, for lack of a better term, the holistic housing strategy, rather than just focusing on the property management aspect of providing houses.”

Bishop goes on to add that traditional healing practice, which fell out of use because they were prohibited.  She stressed the need to renew those practices. “We’re promoting intergenerational healing instead of intergenerational trauma. Planting a new generation of healers. Planting an interest saying ‘this is what the earth has to offer in terms of plants.  Plants as food, plants as medicine, and plants for ceremonial use.’” She also says the knowledge brings pride to the young people.

The camp, which received funding from the SaskCulture’s Métis Cultural Development Fund, offered the participants a new experience, a natural immersion, away from technology. Camp participants were six to 16-year-olds from Saskatoon, who spent their nights in tents and their days learning about the natural world. They learned about plants, how to identify them and how to use them. They saw the plants, but also touched and smelled them. They listened to stories about the plants, learned their Cree names, and their responsibility in not taking more than they should need.

It helped to strengthen the leadership skills.  The summer students planned activities and menus, budgeted, purchased materials, made up emergency plans, and worked with the young campers.

Cheyenne, a 13-year-old participant, enjoyed the camp. “We played games, had lots of fun, made lots of friends, we took pictures of people and the scenery,” she says. “They taught me a lot about what plants were there, and what plants would help us cure certain diseases. “

Richardson says that the young people discovered they liked picking berries and making jam. There wasn’t enough time for all of the things she wanted to teach them.  “They left the area in the same position they found it, there was no litter. They were respectful of the land, of the animals and respectful of one another.

“A lot of the parents and grandparents didn’t learn these skills, it was taken away.  For some reason they were made to feel ashamed of it.  Bringing it back in brings out the pride and dignity of our people,” adds Richardson.