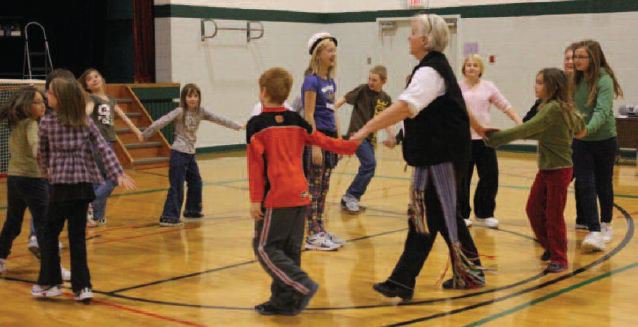 Gravelbourg’s Camille Bell was invited by teacher Anita Clarke to Mossbank School where Bell spent a day presenting Métis traditions to elementary school children. “What a great way to learn about the Métis and their way of life!” exclaims Clarke. “The students are very fortunate to have the knowledge brought to them by a guest who is very passionate about Métis culture.”

According to Clarke, Bell has a wealth of knowledge and passion with regards to Métis traditions and way of life.

Bell presented information about Métis dance and culture to the Grade 3-4 class. She filled the children’s day with stories about the Métis, which included stories about fur traders, Métis marriage and how the Michif language has been lost over the years. The students also had the opportunity to learn about different Métis dances, which are a blend of European and First Nation’s influences. The Grade 5 students joined in for the dance portion. “One of their favourite dances is the Lumberjack Dance,” says Clarke.

Bell also demonstrated how to play the musical wooden spoons for the students, accompanied by the use of a wooden puppet that danced while she played. Bell shared the history of the wooden puppets and how they were used to entertain both young and old.

“This was a highlight for them as they were instructed on how to use the spoons to make music and were given an opportunity to practice this newly learned skill,” says Clarke.

Plenty of discussion about the Métis way of life was also part of the students’ day. Clarke said she believes Bell’s demonstrations had an impact on the students because they learned there are a variety of cultures and traditions in Canada, especially right here in Saskatchewan.

“The ultimate goal is that these students will learn to understand, accept and respect the idea that people and their customs, values and traditions can be very different from their own and they can live harmoniously with people from all cultures,” she adds.