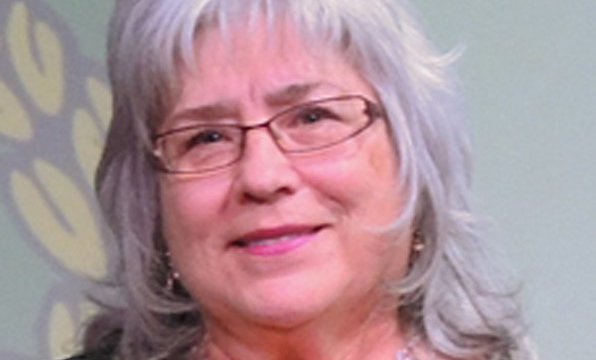 Karon Shmon: ‘I feel like I am innately a teacher’

Karon Shmon is the Director of Publishing at the Gabriel Dumont Institute (GDI) who also has a deep background in education. For over three decades, she has been involved in the cultural and education community in the province.

Shmon was born and raised in Saskatoon with strong connection to Chitek Lake, Saskatchewan, where her mother was raised. Her great-grandparents are Métis from Red River, in what is now Manitoba and her father is from The Pas, Manitoba.  Shmon spoke to Engage Magazine’s Busayo Osobade about her work in the community and what leadership means to her.

What made you decide to work at GDI?

I feel like I am innately a teacher, so after becoming one and doing classroom teaching for 12 years, I made the decision to try and have a broader impact systemically, so I transitioned into being the consultant for what was, at the time, called Aboriginal Education. Social justice issues have always been important to me. It is also important to me that Indigenous cultures and languages, those of the Métis, the First Nations, and the Inuit, are sustained and revitalized. This is our country of origin, so there is nowhere else to get these from should they be threatened by extinction.

What are some of the projects you’ve worked on?

I served on the Awasis Special Subject Council for many years, which provided the much needed support for Indigenous educators.  Once I was able to work with Elders and resource persons of Métis and First Nations ancestry to create learning resources, I found something I really loved. I have served on advisory committees and other groups to advocate for this as well.

During my work as the manager for Leadership Saskatchewan, I was able to raise the participation of First Nations and Métis participants up to 66 per cent in two years. Many of them were already leaders, but I feel the program also gave a boost to those who needed it in order to go on to become community leaders.

GDI was also involved in the Resilience and Respect: Canada 150 & Beyond project, which delivered important and impactful cultural programming that highlighted the resilience of Indigenous peoples, cultures and languages. How do you feel about the project?

A big hand goes out to SaskCulture for listening respectfully to the groups and for taking our advice.  We saw Canada 150 somewhat differently than many non-Indigenous Canadians do. We saw it as the anniversary of the formal process which legally made Canada a country. We wanted to emphasize that Indigenous peoples were here before 1867 and that we have had many disappointments and losses during this process and since.  Indigenous peoples lost land, freedom, and the right to self-determination, while most non-Indigenous Canadians benefitted from the policies and practices we now recognize as colonization.

“Social justice issues have always been important to me. It is also important to me that Indigenous cultures and languages, those of the Métis, the First Nations, and the Inuit, are sustained and revitalized.” ~ Karon Shmon

What does leadership mean to you?

I believe the best leaders build capacity in others by encouraging and guiding them to their fullest potential and by removing any obstacles the leader has the influence to remove, “clearing the path” so to say. Leaders should do such a good job that when they leave, no one notices.

So far, has there been any challenges?

I find it challenging that the term “Indigenous” is now in vogue. I consider it a pan-Aboriginal term that doesn’t require people to use distinctions-based language. This is problematic because even among the three, officially-recognized Indigenous groups of peoples in Canada, (the Inuit, the First Nations, and the Métis), the First Nations have tremendous diversity. People are confused because we’ve gone from “Native” to “Aboriginal” to “Indigenous” and none of them are suitable except in a very specific context. Non-Indigenous Canadians are often proud of their roots. If you asked most of them if they would be satisfied being called “Non-Indigenous Canadians,” most would say, “of course not. I am a (country of origin) Canadian.”

How have you been able to overcome these challenges?

Some of the best advice I was given was “you can still only eat an elephant one bite at a time.” There will be small victories most of the time, big victories some of the time, and setbacks once in a while. As Victor Frankl remarked, “Hope is the last thing to die.”

I find my work a good fit, very interesting and fulfilling, and filled with hope. I must also mention the support and guidance I have received from so many co-workers, mentors, friends, and family members.

Please tell me a little bit about the Métis culture. How important it is for Canadians and newcomers to learn from the history of Canada?

This is very important because the Métis were nation builders.  As a people who originated in Canada, we played an important role in bridging trade and commerce between the First Nations and the newcomers. The Métis were once known as “Canada’s Forgotten People.”  While the Constitution recognized the First Nations and the Inuit, Métis were not recognized until 1982. I like to remind people that the last five letters in the word “history” are S-T-O-R-Y.  What gets validated as history depends on who gets to tell it and from whose perspective what took place is told. The TRC is called Truth and Reconciliation for a reason. Truth must precede reconciliation. Reconciliation is not an event either - It’s a process and it’s going to take at least as long to achieve as it took to be required.

How important is it to connect people to their culture?

It’s very important because we all want to know where we belong.  There’s a sense of satisfaction and of pride in knowing that those who preceded us struggled so we would remember. We honour our ancestors by remembering and passing our heritage on to the future generations.