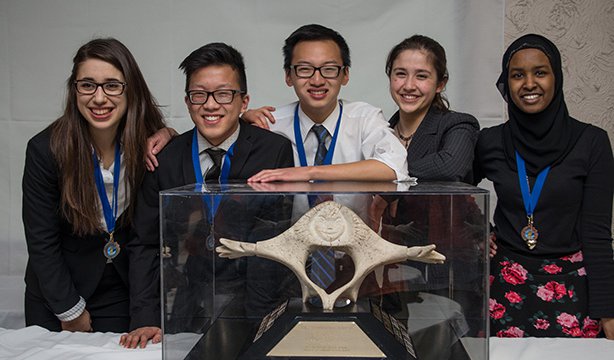 Students tackle tough questions during Saskatchewan Elocution and Debate Association’s (SEDA) annual provincial championship, and this year’s theme was no exception. Two teams of two students each examined the resolution: “This House believes that the Canadian government has failed First Nations students”.

The topic was very timely according to Wendy James, SEDA debate coach, and it coincided with the discussion taking place nationally that it is a big issue currently facing Canadian society, especially with the recent unveiling of Truth and Reconciliation recommendations.

“The other reason why we picked this topic is that we thought there was a moral obligation as an organization to encourage discussion around this particular topic because there is a social justice component around it that has remained unaddressed,” explains James.

In preparation for the debate, the students received a package of information that was composed of formal government reports and media coverage. The students also conducted their own research. Before the championship, the participants did not know which side of the topic they would have to debate, so they had to prepare for both sides of the issue. For the opposition side, the youth had to explore why the government hadn’t failed First Nations students – based on the argument that the fault lies more so in systemic racism.

Leora Diakuw was a one of the championship debaters. Diakuw, who is a Grade 12 student at Walter Murray Collegiate in Saskatoon, says she was really excited about the topic as it was very relevant and there has been lots of discussions taking places from all different sides.

“The good thing about the debate is that it forces you to see both sides of the topic and argue for them in different rounds,” explains Diakuw. “Even if I have a personal opinion in one direction, I still had to learn the other perspective.”

Diakuw adds that her research didn’t result in a change in her opinion about the topic. “I feel as though the Federal Government has a long way to go in term of First Nations education.”

She also believes issues around First Nations education are very important for Canadians to discuss. “We are all affected by the actions of our country, and it’s easy to be ignorant about what happens within our own borders.”

James adds that young people should play important role in the discussion. “Youth can play a very critical role in transforming how Canadian society views Aboriginal issues. Social and cultural organizations need to make decisions that will help us where, we as a society, want to position ourselves.”