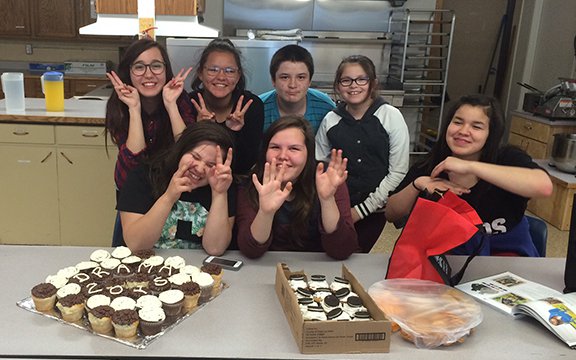 Love of Theatre Growing in the North

Getting involved provides real benefits for the students, says Levay Turner, teacher at Twin Lakes Community School in Buffalo Narrows, who is mentoring a group of 14-20 students, from Grade 6-9, in their work to compete in the Northern Drama Festival this April.

“They really love it,” she says. “At the beginning of the school year, I get 20 kids already asking, ‘When is drama club staring up?’”  She begins in September, teaching basic skills from improvisation to technical theatre, and involves the students in choosing a play. Rehearsals take place from December to April.

“They take it pretty seriously. They work towards competition all year. They know the rules of competition and they really strive to do well.”

Each year, a northern school and town host the festival competition, Turner says, and all competing schools travel there to take part. In 2016, the  Churchill Community High School in La Ronge will host.

“They feed us, they have activities for the kids, and the show in the evening is three plays or four plays back to back,” Turner says. The plays are also        judged, and the following day the judges meet with all of the school groups separately, go over the adjudication, and give them tips to improve.

“And they have all sorts of awards that the kids really like,” Turner adds, from acting to technical theatre, which Buffalo Narrows has won in the past few years.

Different groups in the north will work on plays, but not all groups compete in the festival, adds Darlene Briere, executive director, Saskatchewan Drama Association (SDA). For example, six to eight groups might take part each year, but only three or four participate in the festival. “The aim was really to be able to do a play for the community, and doing the festival is sort of the icing on the cake,” she says.

“They were looking for opportunities for the northern youth, their community leaders, and communities in general to have experiences in drama,” Briere says.

“They wanted some mentorship - somebody to come out and work with them and develop leaders who could take it from there to become a part of the community.  This is something that happens in the community all the time.”

Drama mentors travel to the northern communities, discuss the program, find out participants’ needs, help choose a play, and develop the process. Mentors spend two days in the community, either at one time or spread over a period of time determined by the participants.

Students are encouraged to "build on their own traditions, and the storytelling they do in their community."

Some groups write and develop a scripted play, while some create improvisational works. For example, some communities where people were evacuated during last year’s forest fires are developing a play about the experience.

Students are encouraged to “build on their own traditions, and the storytelling they do in their community.” The program receives support from the Northern Sport, Culture & Recreation District (NSCRD) and the SDA, both supported with funding from SaskCulture and Saskatchewan Lotteries Trust Fund for Sport, Culture and Recreation.