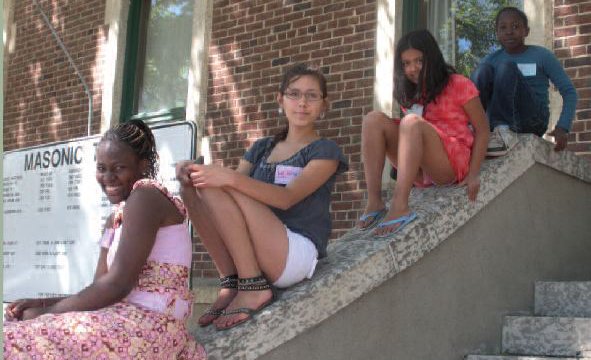 Partnership connects newcomers with a sense of community

Building a sense of home and place can sometimes be a daunting task for newcomers, especially youth. The Saskatchewan Organization of Heritage Languages (SOHL) and the Saskatchewan Filmpool Cooperative recently partnered to present a one-day workshop, entitled Our Home, Regina, which helped newcomer youth connect with their communities.

“The intention of the project was to bring together students to interact with those from other cultures and share their experiences, and also to help them establish a network of peers," says Kelly- Anne Riess, a best-selling author and one of the artists involved in leading the project. The workshop brought together newcomer youth from six different countries - Bangladesh, China, India and Nigeria - as well as youth from Canada and the United States, to participate in a multimedia project that explored a number of mediums including poetry, writing, photography and radio.

Gordon Pepper, executive director, Saskatchewan Filmpool, says, "the intent was also to enhance engagement of immigrant children with integral cultural institutions, such as the Filmpool and the Regina Public Library (RPL) and its’ Film Theatre." The RPL’s Film Theatre hosted a reception for the event, which included a National Film Board screening of films that further emphasized the theme of multiculturalism and home.

Students were taught the basics of photography by professional Regina photographer Thomas Bartlett, followed by an exploration of downtown Regina, with cameras in hand. Kelly-Anne Riess notes that she was thoroughly impressed by the photography of the students. "The camera allowed the youth to see their new home, the city of Regina, with new eyes," she says. Kelly-Anne Riess then led the participants in writing about their experiences coming to Canada and the countries they had left behind.

The students then designed and decorated scrapbook pages that included their writing. Jessica Riess, a multi-media artist and sister of Kelly-Anne Riess, led participants in creating the scrapbook pages. “The students didn’t know each other at the start of the day and were quite shy.” She adds that, “by the end of the day, it was clear that working together had broken the ice and they fed off of each other for inspiration.” By the end of the workshop, the students had created a scrapbook that included writing about their travels and new beginnings as well as their artwork. This scrapbook became the Regina, My Home publication.

Tamara Ruzic, executive director of SOHL, explains the significance of the project. "With the recent surge in immigration in Saskatchewan, it is imperative to support community building initiatives that promote cultural and linguistic understanding." She adds that, the Our Home, Regina project did just that, while simultaneously educating students on a variety of topics in a fun, friendly environment."

"We learned a lot from the students’ impressions of Regina. They were very honest," she says. The project was an excellent example of how creative activities can break down barriers between people and cultures. Pepper also noted that, “this project was a concrete example of this idea in action."

It is the hope of both the Filmpool, as well as SOHL, that this project will grow to be more than a one-time endeavour. “We hope that this wonderful partnership will continue in future years," remarks Ruzic.

Funding for this initiative was provided through the Culture Section of the Saskatchewan Lotteries Trust Fund. To see a copy of the Our Home Regina publication, please visit www.saskculture.sk.ca.