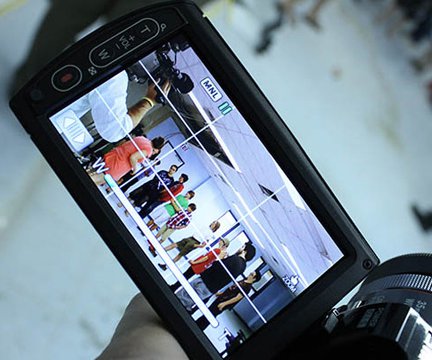 Summer employment at the Filmpool beneficial for all

It's not often that a budding filmmaker finds a summer job that will complement his or her future career and passion perfectly, but that was exactly the case for Mattias Graham.

Throughout the summer of 2011, Graham, a film production student, had the once in a lifetime opportunity to work at the Saskatchewan Filmpool Cooperative (the Filmpool). “I was hired on as a Production Teaching Assistant. The primary role of the position was to help develop and instruct the SaskFilm Summer Film Camp. However, the camp is only one week in the summer and there was plenty of work to be done in the office before and after,” says Graham.

The Filmpool is a non-profit artist run centre which supports, encourages and assists independent, visionary filmmaking in Saskatchewan. The Filmpool hired Graham as a summer student with a subsidy from the Student Summer Works program, which is administered by SaskCulture on behalf of the provincial government.

One of the main projects Graham worked on over the summer was the organization, administration and instruction of the SaskFilm Summer Film Camp. According to Gordon Pepper, executive director of the Filmpool, “Designing, organizing and presenting the camp is an ambitious and time consuming endeavour, which requires the services and resources of both Filmpool staff and summer employment assistance. So having the ability to hire a summer student to assist in the delivery of the summer camp is essential to its success.”

The annual summer camp, now in its seventh year, helps young filmmakers learn how to create stories visually, using all kinds of film and video equipment. Participants shoot and edit all week long; trying out different film crew positions and working together to create several amazing short films. Graham’s roots in filmmaking go back to his teens when he was a participant in the summer camp. He says “Film camp was crucial in my development and while working with the Filmpool, I had the wonderful opportunity to give back to the community and help encourage a new generation of young filmmakers.”

Graham also played a key role in another Filmpool project over the summer as well. The 48 Hour Filmmaking Frenzy involved teams coming up with an idea, shooting it, and processing, then editing a 16mm film for a screening to be held at the Filmpool, all within 48 hours.

According to Berny Hi, production coordinator, it’s a pretty exciting and frantic couple of days. “It’s really a crash course in filmmaking,” he says. “Participants have the opportunity to shoot two rolls of 16mm film, develop it themselves in a darkroom, then edit it all together and develop a soundscape.” Pepper adds that it is an opportunity for young filmmakers to experiment with traditional filmmaking techniques, such as working with celluloid film and learning where words like “cutting” and “splicing”, which are now readily used in the digital film world, originated.

As a summer student, Graham also did a number of other duties around the Filmpool including cataloguing and archiving the Filmpool archive, designing a professional DVD for the film camp and maintaining and preparing equipment for the membership. Pepper says, “It’s often these skills, that some might consider trivial, such as learning how to check equipment for damage after it is returned, that are really valued in the real world. They garner a lot of respect in the industry. Just by being at the Filmpool, Mattias was able to pick up this knowledge.”

Aside from the responsibilities of the camp and the Frenzy, Graham worked together closely with Filmpool staff and educators and the experience served as an excellent opportunity to meet professional video production personnel within the industry. Graham attests to this, “Working at the Filmpool opened a whole new realm of possibilities. Working with a small team in culture prepares you to work in any artist-run centre. Already this year, I have a similar opportunity lined up in Montreal, directly due to my experience at the Filmpool. Overall, the Filmpool gave me the confidence and tools to continue in what is a harsh industry no matter where I am.”