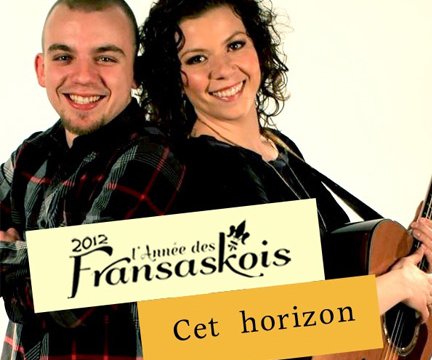 The CCF is currently producing multimedia, retrospective shows, one for the annual Fête Fransaskoise and one for a Metis- French Christmas show that will have a distinctive 100 year anniversary flavour since 2012 will mark the centennial of the Assemblée communautaire fransaskoise (ACF), the governing body of the francophone community in Saskatchewan.

Saskatchewan-based Francophone musicians Alexis Normand and Shawn Jobin will also be hosting a special tour throughout Québec and the Maritimes. The duo co-wrote a song that became the official Fransaskois Theme Song in honour of Year of the Fransaskois.

“We (CCF) will have a national broadcast for the Christmas show to celebrate l’Année des Fransaskois and to thank the province for the honour with a fabulous presentation of ‘MERCI, MA PROVINCE!’ [the theme song] on December 15th,” says Campagne. “Stay tuned!”

The Fransaskois have made many contributions to the cultural fabric of Saskatchewan and these events will help expose the public to the accomplishments and the dynamic culture of this community.

“As a society, the people of Saskatchewan know very little of the contribution of its people to the development of the province,” says Campagne.

For over a century, the French community have been involved in all sectors of the development of Saskatchewan life, everything from the economy to culture and politics.

During the first half of the 20th Century, French-speaking religious orders like the Grey Nuns of Montreal and the Sisters of Notre-Dame de Chambriac established hospitals in Saskatchewan while hundreds of Quebec-trained family doctors set up Year of Fransaskois community celebrating ‘joie de vivre’ in 2012 practices in rural Saskatchewan. Mostly farmers, Franco-Canadians, as they were called before the advent of the word Fransaskois in the mid-seventies, were involved in the creation of cooperatives and credit unions across the province. The first credit union in Saskatchewan was in the French community of Albertville north of Prince Albert. It was established in 1916, 20 years before the province adopted a law for the creation of credit unions. Franco- Canadian farmers were also strong supporters of the Saskatchewan Wheat Pool and other co-operative endeavours.

Fransaskois inventors and businessmen have helped in building the province’s economy. Bourgault Industries in Saint- Brieux is one example of the French contribution to the economy. For 50 years, from 1918 until 1968, the teaching of French was limited to one hour per day in the province and the Fransaskois community had to develop its own teaching material and exams in order to guarantee that the one hour a day would insure the survival of the language. It was these efforts by the ACF and the Franco- Canadian community that has led to a solid Fransaskois and French immersion program in Saskatchewan today.

“It is a cultural community that is open to all who appreciate and like French. It is expressed in many ways through its music, theatre, dance, the visual arts, its writing, but mostly through the ‘joie de vivre’ that a Fransaskois family gathering, or a Fransaskois community get-together, will create,” adds Campagne.

Saskatchewan has a rich, multicultural heritage and it is important for this province’s residents to celebrate their heritage.

“By celebrating multiculturalism, we are recognizing the enormous contributions made to the development of this country and province by immigrants from diverse ethnic origin,” explained Campaign. “The cultural and artistic expressions of each of these groups remind us that we are unique in our relation to rest of the world in the expressions of how we learn, how we love and how we live.”

The CCF receives annual operating dollars from the Culture section of the Saskatchewan Lotteries Trust Fund. For more information about the CCF, please visit: www.culturel.sk.ca.